How Paint Pollution Effects the Environment

Home » How Paint Pollution Effects the Environment
Previous Next

How Paint Pollution Effects the Environment 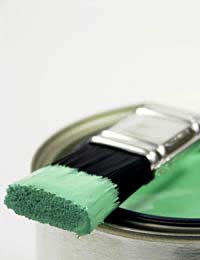 We all like the idea of a quick home make-over – and what better pick-me-up for tired-looking walls than a fresh lick of paint?

But the USA’s Environmental Protection Agency (EPA) classifies paint as one of its top five most hazardous substances. Why? Read on to find out.

Don’t let seductive environmentally-friendly names such as ‘Forest Green’, ‘Primrose Yellow’, or ‘Sunset Pink’ lull you into a false sense of eco-purity – standard household paints are a smooth blend of toxic chemicals.

They generally include pigment (the colour), carried by a resin and/or binder, a solvent to help the paint application, and a dryer. In vinyl and acrylic paints they will also include plastics compounds. Some will include formaldehyde, arsenic, thinners, and foamers.

We like paint. Each year we buy three hundred litres of the stuff. But if we knew the harm it could do, perhaps we’d seek safer paint options.

Prolonged or high exposure to paint and paint fumes can cause headaches, trigger allergies and asthmatic reactions, irritate skin, eyes and airways, and put increased stress on vital organs such as the heart.

The World Health Organisation (WHO) has reported a 20%-40% increased risk of certain types of cancer (in particular lung cancer) for those who come into regular contact with, or work with paint while Danish researchers point to the added possibility of neurological damage.

Although by taking sensible precautions whilst painting, such as making sure there is adequate ventilation and wearing a mask, your problems are not all over once the paint is dry.

There is growing concern amongst environmentalists about ‘off gassing’, the process by which chemicals continue to release volatile toxins into the atmosphere long after their application is complete.

As paint is applied, the World Health Organisation report that the levels of volatile organic compounds (VOC’s) given off are as much as 1000 times higher than found outdoors.

During the life-time of the paint on your walls, it will also continue to release chemicals into the environment as invisible paint pollution.

Effects On The Environment

When VOC’s react with oxygen, they can form ‘bad’ ozone in the presence of sunlight. This is a contributory factor to the greenhouse effect and a cause of global warming. One study by C.E.P.E. attributes paints and varnishes to causing as much as five percent of all VOC emissions.

However, it is not only household paints which are the problem –

Paint used to deter limpets, mussels, and other sea organisms from sticking to the bottom of boats has been labelled as the most toxic substance ever to be unleashed on the marine environment.

Tributyltin – or TBT – was condemned as much as forty years ago when its harm as an endocrine-disrupter were first noted. Since then, it has done untold harm to such sea creatures as oysters, harbour porpoises, mussels, clams, abalone, gastropods, and skipjack tuna, as well as generally polluting the sea.

Although concern over tributyltin has been shared by countries the world over and its use is mainly restricted to unscrupulous practitioners, ratification of a ban has been slow to take effect. However, from 2008 the use of TBT will finally be outlawed in Europe and any boats or ships entering EU waters using TBT will be turned away.

It’s not all bad news. If you want to change the colour of your walls, there is nothing to stop you doing so in a way that won’t harm you or the environment. These days there is really no excuse to buy polluting, chemical paints because there is a wide range of eco-friendly paint productions now available.

So next time you fancy a new colour-scheme, check out green paint!